View Conference 2019: interview with Danny Dimian, VFX supervisor for Spider-Man: Into the Spider-Verse

At View Conference, one of the films that got the biggest spotlight was Spider-Man: Into the Spider-Verse. After wowing audiences with its groundbreaking new animation style, people have been eager to learn about how all this was created. Visual Effects supervisor Danny Dimian had two presentations about the inspirations that lead to the look of the film, as well as the technical challenges and new tools that all came with it.

Dimian has been in the VFX industry for 27 years. His first work at Sony ImageWorks was on Hollow Man, creating transformation effects on the characters, and has since worked on many Sony Animation projects, such as Cloudy with a Chance of Meatballs, Hotel Transylvania and most recently, Spider-Verse.

We had the chance to meet and talk with him at VIEW Conference. Below is our interview.

What were your many inspirations when starting to work on Into the Spider-Verse?

Danny Dimian: “It started with the idea that we wanted to do something different, something that people had never seen before. We were all excited about the idea that this will be a comic book movie, so we started with the actual comic books. The ones that looked more interesting and felt that had the most life in them were actually the really old comic books, the ones that were printed kind of weirdly, before you had the technology that allowed you to have smooth, perfect images. They had lots of half-tone errors, and other misprints, and all that. Not to mention that these drawings were drawn on paper, not digitally on a computer. The other inspiration was, because we had to make them move, there wasn’t a lot of examples of comic books moving. Anime was something that obviously inspired us, we looked at the way they handle movements and effects. There was an art that was appropriate in a lot of anime movies. Even pop art, the classic J.W. Turner paintings, anything in the fine art world that looked interesting to us, so we had lots of examples of that. All this inspiration turned out to be great, because the final answer was a little bit of everything.” 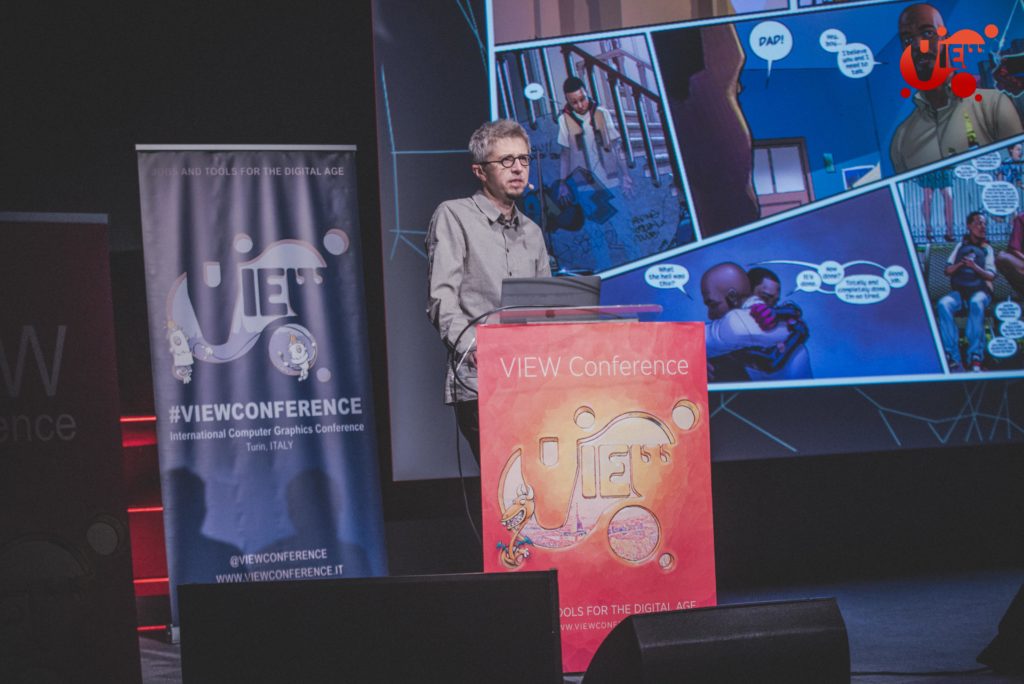 Since you mentioned the imperfections of comic books and how it inspired the movie; it’s very interesting because usually, when you are working with CGI, everything has to be perfect with no mistakes. How did you achieve this imperfect look?

Danny Dimian: “Some of it was embracing the things that went wrong in our early tests. Anything that looked interesting but wasn’t what we expected, we would put those aside and we would go “let’s remember this, maybe we can use this somewhere.” Another thing was to use hand drawn elements. In the effects, the majority of the hero pieces were actually hand drawn in 2D, then we used them with 3D in conjunction with simulation. The simulation can do timing, scale, and a lot of things, but the cycles themselves were hand-drawn. There were also all the tools that we wrote to draw on the screen. Our character designer was able to draw all the expressions on our models right on the flat screen, so not on Maya, not in 3D, but flat, to the views that he sees. Those were automatically converted into geometry, so that the rigging crew can rig them, and the animators can animate them. But they all started the way that our character designer decided how he would draw it, the origins of every piece of line work was from him. And they’re not attached to the surface, so with that, you get this imperfection that they’re not connected. The computer is still controlling it, but because it’s not connected, you’re not getting computer perfection. With every step on the way, we were looking for places that we could “break” something. Literally break it in the sense of traditionally, it’s not the way you do it.”

It’s really great how the film takes the best from CGI and hand drawn animation.

Danny Dimian: “Yeah. When we started, we only knew two things. We didn’t want this to be a cartoon. To us, cartoon is a sensibility that is not right for this. It has too much squash and stretch to 2D, and we didn’t want that. At the same time, we didn’t want anything that made people compare it to anything realistic. In the middle of those two, there was this big dark area. That’s another thing I like to tell people who are working on new things, that it’s okay to not know, to get deep into a project, and still not have it all come together. We didn’t really know how the pieces would fit until very late. We just knew we had all these pieces that we liked.” 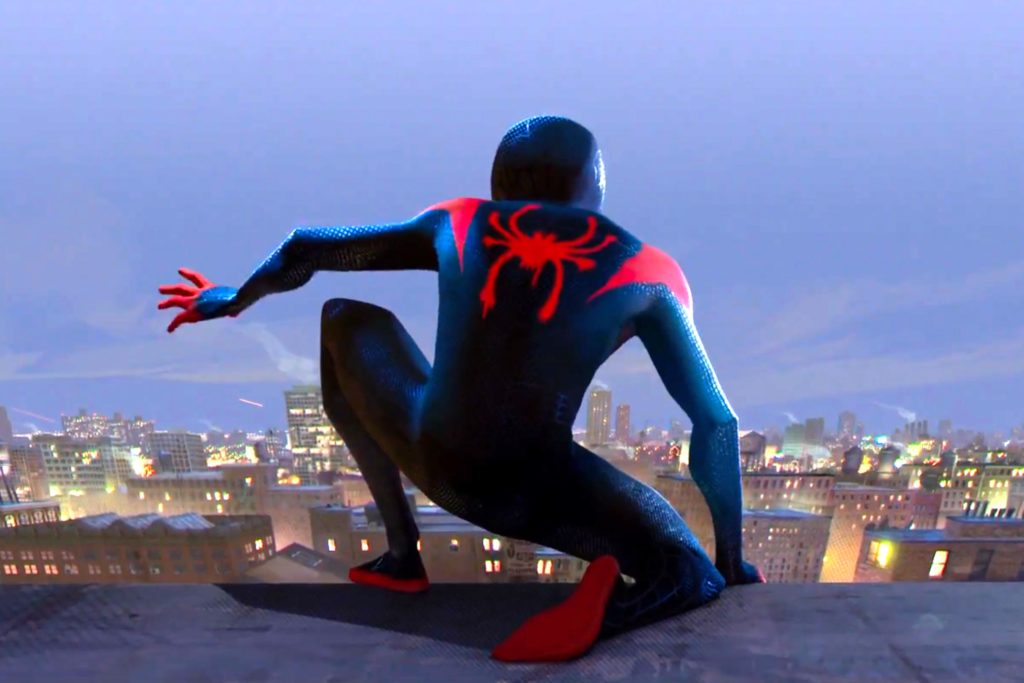 You’ve been working with Sony for quite a long time…

Danny Dimian: “Yeah, I’ve been doing this job for about 27 years, and I’ve been with Sony for 20 years, starting with Hollow Man.”

…and you worked on Cloudy and Hotel Transylvania…

Danny Dimian: “Yeah, and before that, Surf’s Up and Monster House.”

And these are all very stylized compared to the standards that you see from a Disney or Pixar film, and then there’s Spider-Verse, which is totally stylized. Can you talk about the evolutionary process?

Danny Dimian: “One of the things that helped us on Spider-Verse was the fact that we had executive producers and directors and us, and we all wanted the same thing. Moreover, we had the protection from the Executive Producers to let us do it, and that’s not common. Another thing that helped is having too many Spider-Man movies. Before our film, there was already eight of them. When we did ours, we had to ask, “What do we do to tell people to see yet another one?” That’s where it started. Also, at ImageWorks, we don’t really have a style, and we didn’t have a big hit before. We’re not Pixar that had hit after hit, and each film having a house style, to the point where it’s not really a good idea to do something different. Success is not always a good thing. I mean we did well, but we never had the hit that stuck or constrained by. The fact that we do films not just for Sony Animation, but for other studios, as well, we get to do all these different looks. That leads to a methodology, a pipeline, where you’re always doing something new, and you’re used to that. We had done different things, like Hotel Transylvania, where Genndy Tartakovsky has a style that uses a lot of squash and stretch, but also he wants them shaped in certain ways to the camera, so we had all these tools where it takes the geometry and brakes it to do all kinds of things to the camera. We used all these things in Spider-Verse, as well, to make things look more like the way you might draw it, and not how the geometry would do.” 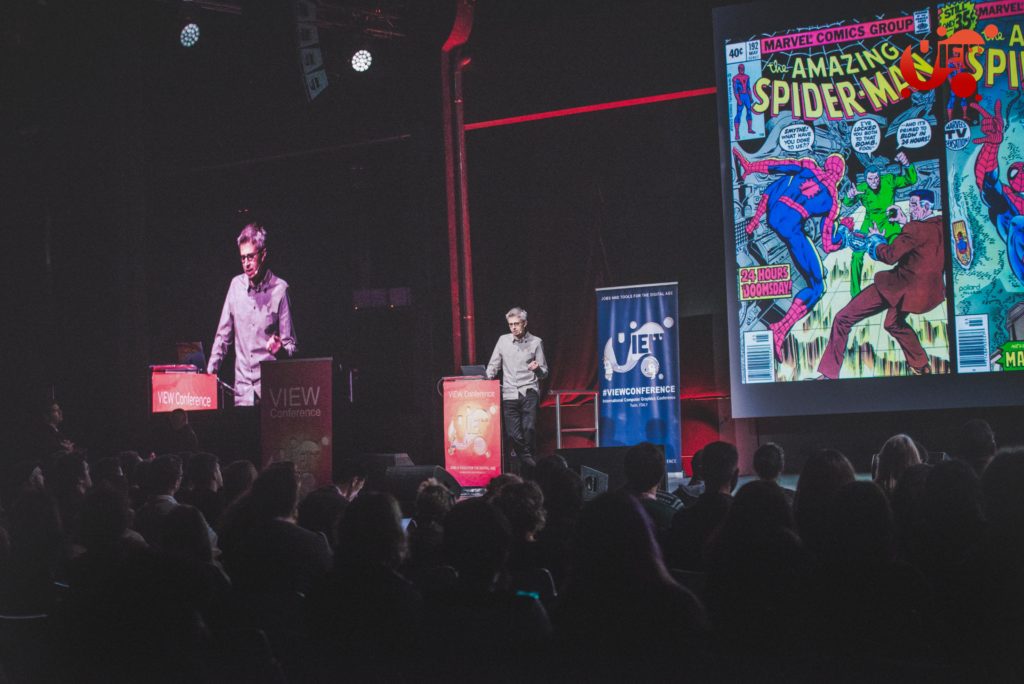 In the movie, there are six Spider people, each with their own different and unique style. Was there any challenge in balancing out these clashing looks?

Danny Dimian: “The short answer is, yes there was, but not as much, because we had fewer shots. If there were more shots, then it would’ve become more of a challenge to make sure those looks are efficient enough. We had 2700 shots in this movie, because of all the multi-panels and such. Animation now has lots more shots, than it used to. A 2D animated movie usually was 85 minutes and has 1200 shots. The thing that made it not much of a problem was two things. We have a very flexible way of exploring looks just because we didn’t know where things would go, and we had already tried so many things. The other was that you can muscle through many looks if it doesn’t require too many shots.”

Danny Dimian: “The animation is definitely a mix of all kinds of ideas. The best way I would describe it is the way I describe the look of the film, and that it’s a collage. It borrows from everything to try to find a new language to fit for this new content. It’s not appropriate for everything, though. We have a couple of other projects at Sony now that are going to look different from what you’ve seen, and it’s meant to look more inspired by physical drawings and paintings, but they don’t look like Spider-Verse at all. For us, that movie’s style is not appropriate for anything except what it was meant for, a comic book. The ideas, however, is what will and should be expanded and put into movies. The idea that people should look at their story and decide what is the best way to tell that story.” 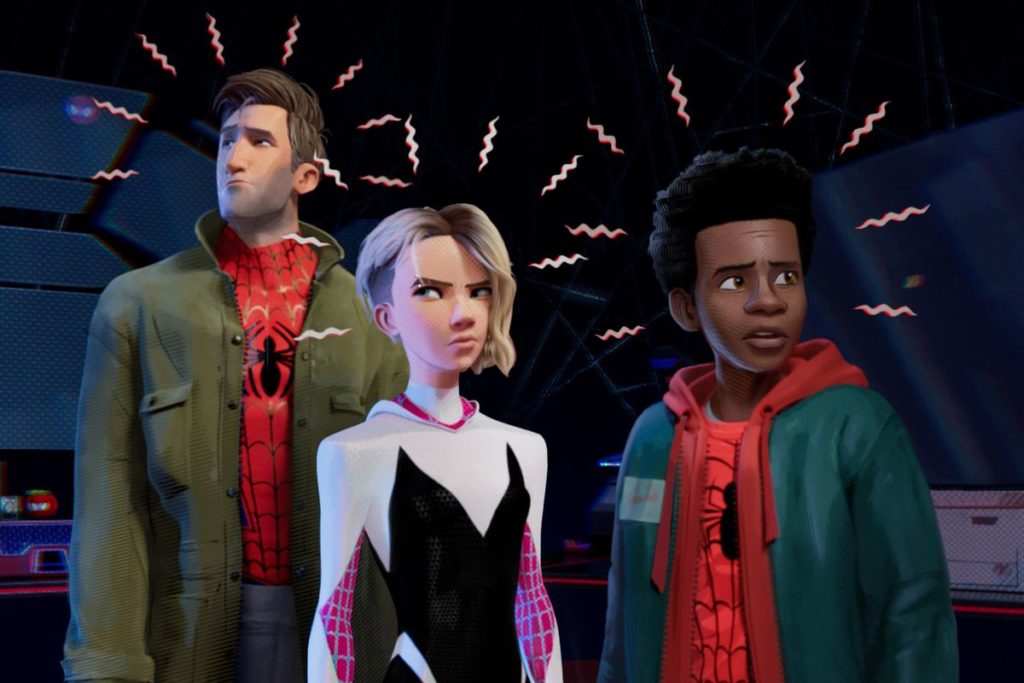 It’s so rare that something like this happens for an animated movie.

Danny Dimian: “This is one of the times that happened to me, as well. Cloudy was something similar, and so was Hollow Man, in a different way. That was fun, because it was a technical challenge. Beforehand, there was no way of doing transformations of bodies, so we had to write the tools ourselves. I talk to people about this experience and what it was like to doing something without any sort of user interface, just people writing code, and writing a script to explain how you visualize things.”

Can you talk about any of your future projects?

Danny Dimian: “As soon as it’s announced and the first trailer comes out, then I can. I can tell you that there’s more stuff coming, and people feel good about things being different. There’s a willingness to try different things, and I’m excited about this, as well. There are little cracks in the wall of CG being just for kids’ movies. If you’d ask me five years ago where I thought animation would go, I would probably be sad with the thought that I might die without ever making an adult animated movie, but it’s less likely that will happen now. Who knows, it’s still a little hard, because it takes a lot of time, effort, and money. But I think people are starting to come around to the fact that it can be just a technique, not a genre to make anything animated. But we will see something out of Europe first before seeing something in the US.”